Materials for stickers and labels: a deep dive

Choosing your sticker or label material does not have to be complicated. The most important aspects to keep in mind are the look you are after (aka which material you like the best) and how durable/waterproof you need your material to be.

However, there is so much more to learn about sticker and label materials. And in this article, we are taking you on a nerdy deep dive!

PVC stands for Polyvinyl chloride. Often referred to as vinyl it's popular for wrapping vehicles because of how flexible it can be.

Polyester (PET) is a film with outstanding durability, temperature, UV, and chemical resistance. Polyester tends to be great for labels with outdoor applications.

Polypropylene (BOPP) is a film with high tear resistance & rigidity, making it ideal for beverage & many other label applications. It's the industry standard for labels.

The term vinyl is a common name for a print film made from PVC.

It's a popular material in the sign trade and custom sticker & label industry. Although more widely recyclable alternatives, such as PP & PE, are gaining in popularity, especially for label applications. We are using a widely recyclable PP for our vinyl stickers and labels.

Cast & calendered are two 'grades' of vinyl, referring to how the film is made.

Making a cast vinyl begins with a formulation (aka recipe) that's all mixed in a large bowl in a precise way.

This mixture, known as 'organosol', is then precisely metered or cast onto a moving web known as the casting sheet.

It passes through multiple ovens to evaporate the solvents leaving a solid film. This film is wound onto large rolls ready for further processing, usually adhesive coating.

Cast materials are very stable, and can be very thin, which can make them extremely conformable.

Because of this, wrapping vehicles & boats are prevalent applications of cast films.

Calendered films are also mixed and later kneaded in an extruder by huge heated rollers to form a long, thin sheet of vinyl.

The vinyl mix gets fed between two large counter-rotating rolls, heated at 350°F.

This mix gets pulled between the rolls and flattens because of the temperature & pressure, forming a 'strip'. The strip passes over multiple calender rolls getting thinner each time.

Embossing rolls apply gloss or matte 'patterns' to the film whilst it's still heated. Now that the film it's cooled and transported to be wound into large master rolls.

Here are the fundamental differences between all films, for easy comparison:

Laminating is a process where a liquid or transparent plastic film is applied over a printed sticker or label.

Laminators come in all shapes and sizes. A traditional, wide-format roll-to-roll laminator looks like this: 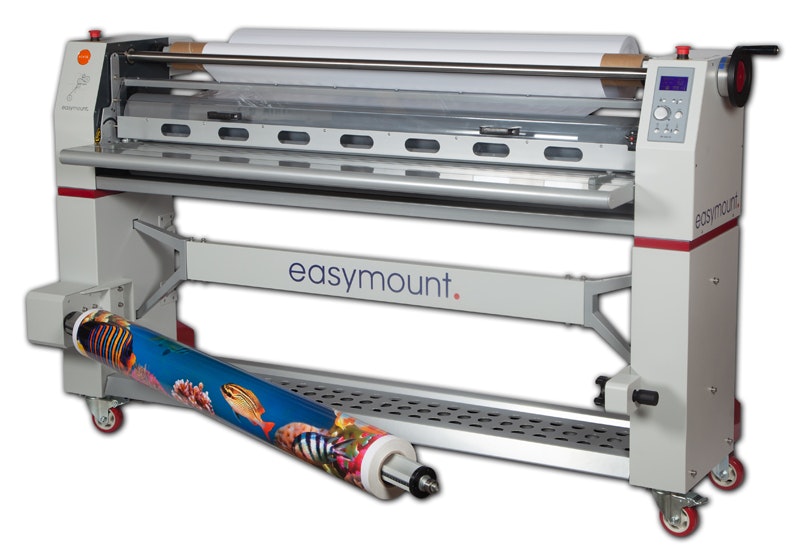 The printed roll of media (also known as vinyl or paper) gets put through the rollers. A transparent plastic layer is stuck to it to give extra protection. Here's a close-up of how it looks: 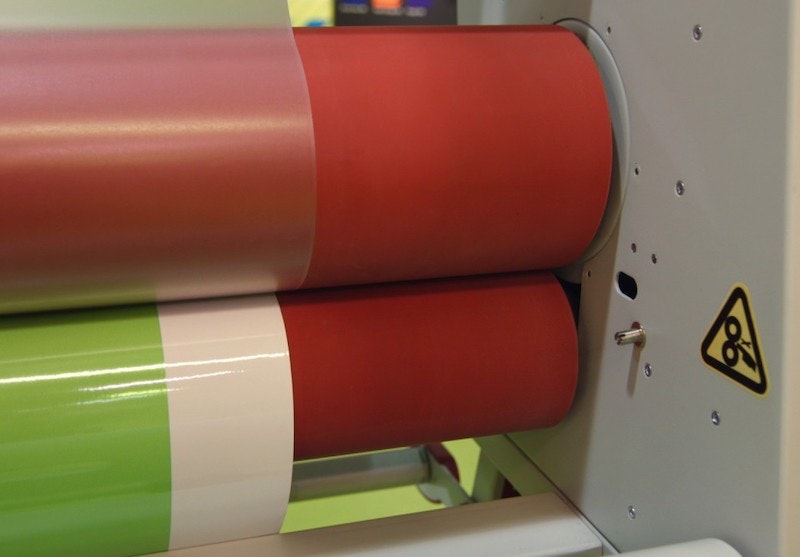 You can see the clear laminate at the top and the printed media coming from the bottom. Both materials are fed between the rollers, to apply the clear over-laminate.

What is liquid lamination?

Liquid lamination is very similar, but a scratch-resistant liquid is coated onto the printed media's surface instead of a plastic layer being applied. This provides less protection than plastic but is better than nothing, so suitable for labels that require moderate scuff resistance. It's also low-cost & environmentally friendly because it doesn't use plastic.

If you want to learn more about the world of sticker printing, visit our blog or ask our experts any question you can think of. You can also get a closer look at our materials by ordering a custom sample.