The Secret Power of Stickers

In this article, we want to dive a little deeper and explore the social and psychological meaning of printed stickers to explain why they are such a powerful and influential marketing tool that can help you grow your business and hit your targets.

To do that, we will jump back to the early twentieth-century social sciences when Swiss linguist Ferdinand de Saussure coined the term “semiology”. Semiology describes the study of “the life of signs within society” (Source).

This goes back to the belief that social and cultural interactions are structured by signs, concepts that we use to refer to the real thing. Language is the most basic structure of signs we use daily – imagine you would constantly have to carry the real thing around in order to communicate, that’s impossible. Instead, we have come up with a system of words (signs) that enable us to refer to such concepts, meaning we can speak about things that exceed our immediate surroundings as well as abstract ideas.

This graphic explains the two components of a sign: the signifier and the signified. The signified is the concept, say a cat. A cat exists no matter what you call it – cat, Katze, chat(te), gato or gatto – as a four-legged, feline domesticated animal. The words we use to refer to this animal are the signifiers. The connection between signifier and signified is culturally specific and enables us to form meaningful utterances within a community that speaks the same language.

In 1976, French philosopher and literary theorist Roland Barthes added a second layer to this process to explain how a sign can be culturally charged and differentiated from its inherent meeting. The four-legged feline animal that we call cat can suddenly represent different concepts depending on the context, e.g. the culture, in which it is being referred to. A cat can then become a god-like creature, a pet or even a symbol of witchcraft. Barthes refers to this second-level signification as connotation, evoking all the cultural codes that are activated when we speak about a cat or see the inscription “c a t”.

What has this got to do with stickers?

It shows how powerful a single sign can be. Stickers allow you to access this power by turning your logo into a symbol. When used in the right context, a sticker not only evokes your business but offers you the possibility to dip into the cultural associations stored in a society and position your brand consciously within them.

Let’s look at famous street artist Shepard Fairey. You might not be familiar with his name, but you will recognize the logo he created immediately. 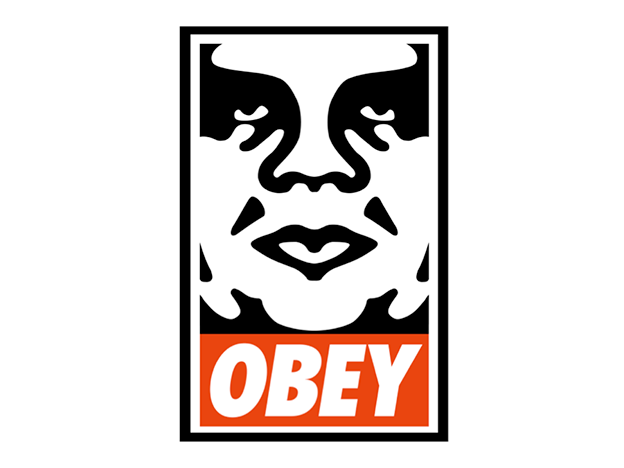 Obey stickers have been circulating for more than 20 years not only to represent the clothing line established in 2001 but as a critical comment on the social and cultural establishment and the norms and rules it has created. The sign “OBEY” plays with the denotative meaning, evoking connotations of counter-culture movements and social criticism.

Stickers offer a low-cost, effective, yet alternative medium to spread such messages among a large number of people in a short period of time. Fairey himself states that “[i]t is hard to believe that paper and vinyl with adhesive backing can do so much” (Source).

At Sticker it, we want to help you to get your message across and reach as many people as possible with your ideas. We offer great and timely production to enable you to distribute your logo stickers effectively and tap into the secret power of stickers.